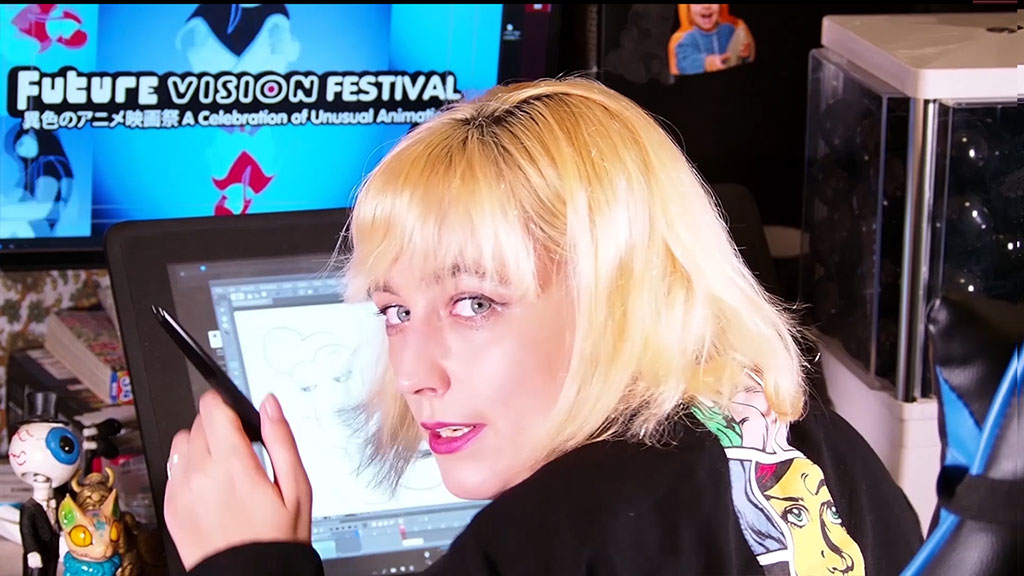 Straight to work then! What kind of work do you usually do?

Today I earn my crust in the cut and thrust of the Tokyo commercial animation houses working on TV series, advertisements and other animated content. I make films with my partner Claudio Sanzana for FUTURE CARTOONS and am the creative director of Future Vision Festival, a new annual showcase for unusual international animation.

What is a typical recent job?

Recently I have been production manager on commercials for pH Studio, an animation house in Tokyo that has been going for nearly 30 years. We have been makings ads with a Dutch/Japanese team for everything from fridges, Uber Eats to Korean mobile games. It’s intense because the schedules are super tight and quality standards are very high. This also makes them a lot of fun to work on though. No time to overthink! I got to make a few shots for Studio Trigger’s Cyberpunk: Edgerunners recently too, which was very cool. I got to draw a sexy robot arse.

[text continues below this youtube example of Uber Eats]

What is your ideal job?

Anything animated. I love it all.

How do you start when a job like this comes in?

In Japan you typically make a test or sometimes several tests first, then negotiate the budget, which is tricky business. Holland is different in that respect. I actually would like to do more Dutch gigs because production tends to be a lot clearer and upfront.

How do you work, from home or in a studio?

Sometimes at studios, but usually at home in my underwear behind the computer.

Break! What do you eat for lunch?

Rôti sans pareil based on a recipe from ‘L’almanach des gourmands’, without the ortolan drowned in armagnac of course. That would be breaking the law.

And quite a challenge to continue your busy schedule after lunch. 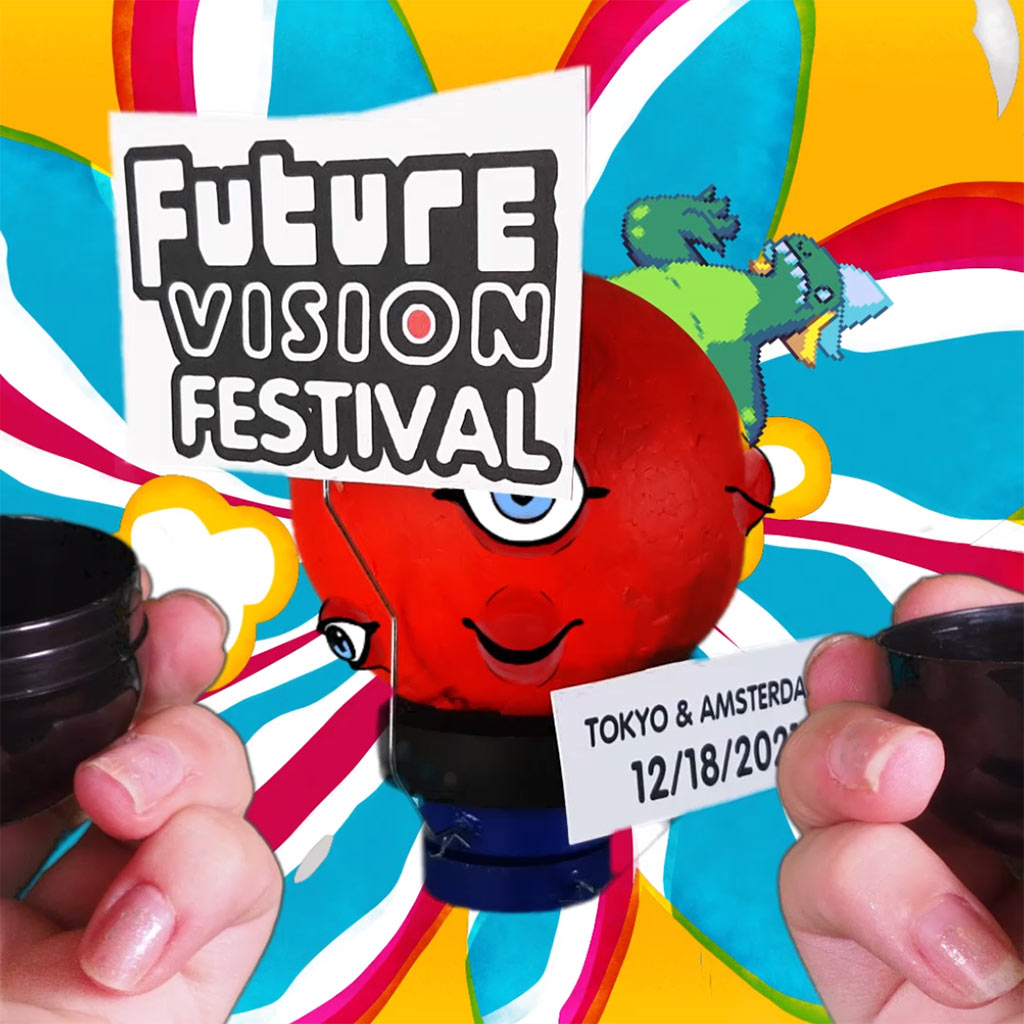 We also noticed you as a programmer and initiator of Future Vision Festival. Can you tell us about this?

In December 2021 Future Vision Festival launched with an exhibition and screening in downtown Tokyo, a continuous three-day free online programme of over 150 films, and a series of interviews, films and features on SALTO 1 TV in Amsterdam. The plague scuppered plans for a sister screening at Vrij Paleis op de Dam on December 18, but an Amsterdam screening at the 2022 festival is already in the pipeline. Luckily everybody around the world still got the opportunity to see these strange and wonderful films online.  The voices in these films are unusual to hear and impossible to ignore. We received 3,000 exquisite, animated treasures from every corner of the world in response to our call for proposals. The team selected films which broke the mould in technique and subject matter, and which manipulated images and interfaces in unusual ways. The films are a mix of every imaginable animation style, bending and blending techniques and transmitting a gamut of themes direct from the zeitgeist of today’s animation makers worldwide.

What brought you to Japan?

I was born in Dublin, Ireland into a big Irish family of artists and musicians and grew up in Amsterdam. I first started making animation when I was three and loved Japanese manga and anime. My animation studies at the HKU University of Arts in Utrecht brought me to Japan as the first European intern at GONZO Anime Studio in Tokyo. I continued my Japanese language and postgraduate animation studies at Kyushu University of Design, Osaka Electro-Communications University and at Tama Art University in Tokyo. After I graduated I hung around as a freelancer and so far so good. I have been in Japan 7 years and counting.

When did you get the idea for Future Vision Festival and who do you do this with?

I have a lot of animator friends around the world and in 2013 decided it would be fun to have a party and screen everyone’s work. Back then it was called Fay’s Film Festival and was at a literal underground bomb shelter De Vondelbunker in Amsterdam. Happy days! It grew and in 2016 I did screenings in Osaka and Kobe as well. Since Tokyo is a big city I figured it was time to go big or go home and officially became Future Vision Festival in 2020. The festival is supported by The Embassy of The Kingdom of The Netherlands Tokyo, and included a selection made by Egbert de Ruiter of work by future visionaries of the Dutch animation world, the current students of the HKU University of Arts Utrecht.

What is your ambition for the festival in the future?

This year at Future Vision Festival we screened animated and live-action shorts, created a zine and displayed 360 VR films and the indie game Kimono & Chibby Chan Save The World by Arcane Circus. Video-games, media art and live performances are things I would like to expand upon in the future. I like pushing the limits of animation into real space. We are also creating programmes which will be broadcast on Salto 1 TV through-out the year. We hope to broadcast on Japanese TV along-side late night anime in the future as well.

Do you have examples of NL/JP collaborations in animation?

The only animation house I know of that does animated JP/NL collaborations is FUTURE CARTOONS. We’re working on an animated pilot called The Adventures of Kimono & Chibby Chan. Kimono and Chibby Chan are escaping an ominous phenomenon called ‘The Disappearing’ along with all kinds of strange people and creatures. It’s an old school odyssey with music progressing the story. When I make a cartoon, I always start with music or a song and the pictures come from that. We’re creating the score with The Doppelgangers, Amsterdam based songwriters together with Acid Mothers Temple who are a psychedelic Japanese collective that I’ve been a fan of forever. FUTURE CARTOONS has been working here in Tokyo and long distance with a Dutch/international team. That diversity of population is reflected in the style in a way, because it’s a very mixed-up world. It’s also a mixed media world, I guess. As the collaborators tell their part of the story, they are free in terms of style choice. A lot of animators want to work that way, but they rarely get the opportunity, so, yeah, that makes it a really fun project to work on. The plan is to premiere The Adventures of Kimono & Chibby Chan in 2022. There’s a very deep Dutch connection in this project. I suppose that’s because I have a very deep Dutch connection. I lived in Holland more than half my life. Our background artist is Anna Engels, the best background artist working in Holland today without a doubt. We met in high school. She’s incredibly talented. What’s so great about Anna is that we can let her loose on Kimono & Chibby Chan. Dutch animator extraordinaire Dennis de Bruin is another incredible talent and long-term collaborative partner on my commercial and independent projects since the very beginning. His versatility and skill in animation consistently achieves the seemingly impossible. These days we have a new generation coming up as well. We’ve got several students working on this project from HKU and also from the Grafisch Lyceum. It’s an honour that these young artists have approached me and want to work with me. I always really appreciate that.

How much time in the day are you busy with your functions?

Due to the NL/JP time difference pretty much 24/7 baby!

Do you decide how to split your day, does the client or do you do this together?

I am pretty much free to decide myself but need to be ready to jump if a client contacts me, there is a meeting or a sudden deadline. During the day I am managing the Japanese side and at night the Dutch side. Usually I am drawing on projects as well as managing. If I am lucky, I get a catnap in somewhere.

What do you need to accomplish your tasks?

A computer, coffee and cigarettes. And lots more coffee.

Did you choose to be a freelancer?

I have been doing freelance gigs as an animator and designer since I was 16. It’s just who I am I think.

What would you like to tell our audience about being an animator?

My favourite thing about being an animator is that everything is possible and the medium encompasses every art form you can think of. Drawing, writing, sound design, music, computer graphics, collage, painting and even dance, sculpture, theatre, typography…it is all possible. Animation is the ultimate medium!

End of the day, what do you do to relax?

A cockentrice with something opulent. I eat alone.

Uhm, that sounds delicious. Bon apetit and thank you for your insights!

[Below this colorful poster of Future Vision Festival, you will find a list of clips and inspirations by Fay]

Gal & Dino (Fay was a colour designer on this show)